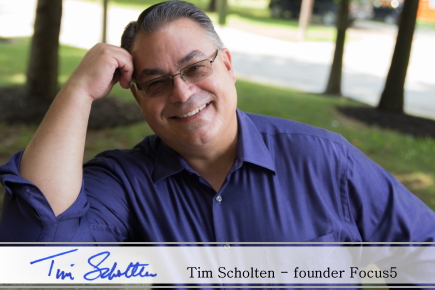 My new boss had fifteen or more direct reports, and he was in our downtown facility with most of my peers. I was located at our operations center about fifteen miles away.

Because some parts of his organization were experiencing significant problems and because of the physical distance between us, I knew there would be little time for him to get to know me and what my teams do.

I realized that it would be difficult for him to gain trust and confidence in me with very little interaction.

As I was sitting in my office early one morning, I pondered the fact that having recently relocated my family to Ohio, their future was at risk along with mine.

As I was wrestling with this new reality, I realized that my real problem at the company was staying visible during this murky time of change.

I asked myself what I could do to change the fact that my new boss had little time to get to know me and appeared to have little interest in the part of the business I was running.

Then it hit me… This situation was just like my late high school years.

Back then, I sometimes hung around with a group of guys who were popular.

Not that I was, but I was part of their group.

The challenge then was that I lived about seven miles out of town on a farm, quite far from those in-town kids.

Doing things after school or on weekends wasn’t an option for me because I lived too far away, and I didn’t have my own means of transportation.

What made it worse was that there were no other kids my age within miles of my house, so my life consisted of working on the farm, going to school, and hunting with my dog.

I remembered one Monday morning at school when I overheard the guys talking about the great time they just had over the weekend—hanging out, playing basketball, and having a few laughs.

I remembered walking down the school corridor by myself feeling so sad: they hadn’t even thought of asking me to join them.

I was off their radar, and I felt alone and invisible.

That evening, in our farmhouse kitchen as I sat at the table after dinner, I poured my heart out to my mom about how isolated I felt from the kids my own age.

As the great mom that she is, she listened and could visibly feel my pain.

Then she suggested that I think about it and that we could talk further when I had some ideas about how to solve this situation.

A few days later, I came up with my plan: What if I could get a part-time job that would allow me to earn enough money to buy a car?

The farm income was just enough to pay for the necessities over the year.

I needed to earn more if I were to have the money to purchase and maintain a car.

After discussing it with Mom and Dad, they agreed that it was a good plan if I could keep up my chores and grades.

So, step one: Get a job; step two: Earn money to buy a car; step three: Get the car, become visible to my town friends, and start living life more fully!

I’m happy to report that I landed my first job in banking starting that summer before my senior year.

That job provided me the means to afford a car and stay connected with my friends.

I was no longer isolated; I was now more visible and was invited to parties and other fun things – all because I had decided to act and get on their radar.

Back in my adult world now, in my office at the bank, I realized I could tackle the current situation in a similar way.

I grabbed a yellow pad and outlined the goal of improving my visibility with my boss and yet not cause a burden on his time.

I knew that time was his greatest challenge, so I decided I would shoot for being a high-performer who required little-to-no support and put together a plan – a plan that led to the creation of my Focus5 business process.

After six months of working with my plan, one morning I came across my boss outside our office building and asked him how the process was working out.

With a big smile, he said, “It is working great for me! I understand your business, know how you are doing, and can speak to what is working or not working when issues arise. I wish others on the team would use a similar approach. You make it very easy for me, and I appreciate having you on my team.”

Wow, despite having very little personal interaction over the past months, my boss felt as though he knew me and we were working together toward common objectives, and he appeared to trust my judgment.

I now knew that my family’s future was no longer in immediate jeopardy.

Later that year, I received a great performance review and confirmation from my boss that he had meant everything he said earlier.

Shortly thereafter, he gave me the added responsibility of leading the online banking team.

We implemented the weekly Focus5 process with this team of five people, and in just eighteen months, we became the number one consumer ranked internet bank in the United States.

We competed with peers that were more than twenty times larger and with budgets and staffing that made ours look like a rounding error.

That is when I understood that with the right process, even average people could achieve extraordinary results.

The Focus5 process was my secret to not only becoming visible but also to becoming extraordinary.

Now you can use the same strategies and technology to become extraordinary in pursuit of your personal goals and dreams.